It’s Saturday night and I’ve just watched Before Sunrise, Before Sunset and Before Midnight on a row. I’ve been planning to do this since I bought the Criterion Collection Blu Ray set and decided it was a good idea to talk about them on a revisiting article since it was my first time watching them one after the other. The first time I’ve watched one of these films was when I was still in high school and I started with the second one, having no idea that it was filmed after a nine years hiatus from the first movie. Later in 2013, the movie received a conclusion where I gladly watched on the big screen. Having re-watched all of them today in a sequence and on this period of my life, meant a great deal to me and I can now say for sure that this is one of my favorite trilogies ever.

As most people know, Before Sunrise is a film by Richard Linklater released in 1994 with Ethan Hawke and Julie Delpy about two students who meet on a train in Europe and decide to spend the day together on Vienna, talking about their lives, feelings, and vision towards life. The movie concludes with an open ending where we don’t know if they’ll see each other again or not, which resulted in a second film nine years later with the same director and actors on board, following where they’ve left off. I’d like to start talking about the second movie of the trilogy, Before Sunset, as it is not only my favorite from the three but the first one I’ve ever watched it. 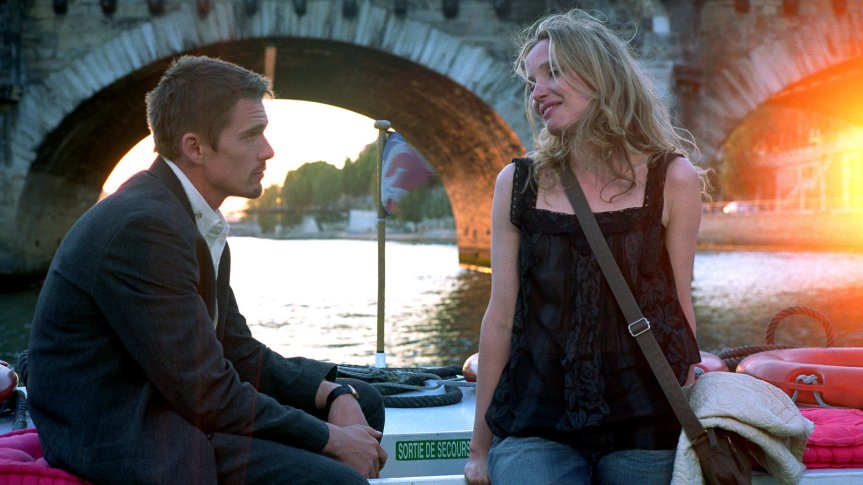 Before Sunset shows what happened to the couple of Jesse and Celine. They’ve never met again after the first film and this kind of took their lives to unexpected places where they have never really come in terms with their reality. Jesse is in a troubled marriage despite having a successful book which talks about the night he spent with Celine nine years ago. Celine, however, is also in a serious relationship with a photographer but seem to carry the ghosts of her previous relationships on the shoulders, which were problematic exactly because of the night she spent with Jesse nine years ago.

What I love the most about Before Sunset and what it compelled me the most the first time I’ve watched it – even without having watched Before Sunrise before – is how the movie talks about the coincidences of our daily lives. Is everything faded to happen for a reason or are we living in purely chaotic coincidences? After all, the trilogy consists of these two incredible characters talking nonstop about their views of life, love, relationships, politics, sex, etc. So the fact they see each other for the first time after all these years makes them confess how life took its own course and shaped them more than they would like to admit. They keep asking themselves, how would our lives be if we had met each other soon after that night? How much of the life we live today represents what we truly are and how much of ourselves have we gave up from? This is a question that haunts me every day like it probably haunts everybody who reads this text. Are we doing the right choices? Are we happy? Are we following in the right direction? How much time we still have with the people we love? Are we going to find love?

With that said, the dialogues of Before Sunset are way more interesting and compelling than the other films, since it’s way more real and touching. Not mentioning it helps to shape Jesse and Celine’s characters which traits seem to form an arc when it comes to representing what brings them together, or why we love them so much. Jesse is this romantic spirited free American who loves sex and Celine is this activist feminist who has very original concepts about relationships. Their vision of the world in 2004, which is when the film was made, is more solid and consistent with what they’ve expressed in 1994. Back then, they were just students with their whole lives ahead of them. Now each of them had a serious relationship with other people and they had been carrying that night in Vienna on their hearts for almost a decade. How to compensate? Will they ever?

That’s when I turn back to the first film, Before Sunrise. Without thinking there would be two more films after this, the movie alone would have been a great romantic jam from the 90s, but now as the years have passed, we see more depth and charisma in Jesse and Celine’s story in Before Sunrise. It’s incredible what Richard Linkater did with Kim Krizan on the script about two young students who spend a night walking around Vienna. Jesse is not the American stereotype, and how he engages in a conversation with Celine is extremely natural and we feel it could happen to any of us. More than that, the conversations they share throughout the film are extremely human and touching, talking about the concepts of life and society without being pretentious. It is truly a special film, but I’m afraid to stay it’s the minor one from the three, as the movie seem to spin around its own orbit. Before Sunset comes from Before Sunrise and makes a statement of what would have happened and what has led them to here, while Before Midnight passes way beyond that to talk about marriage and what happens after the happy ending. 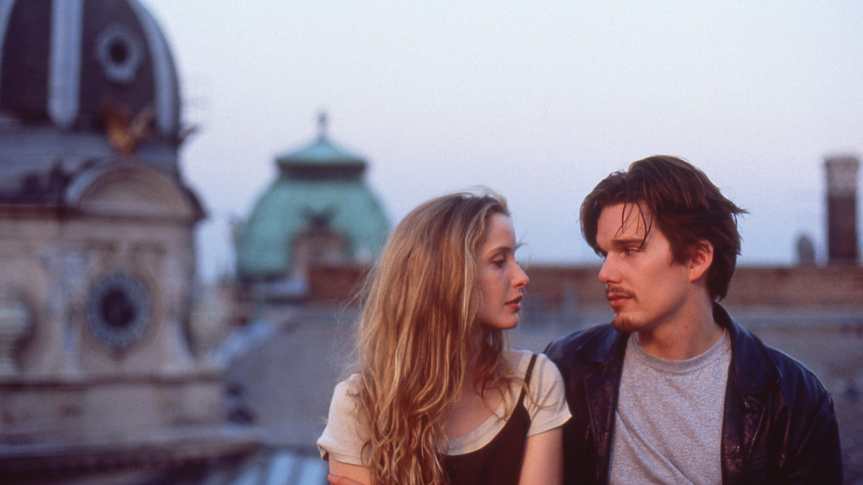 When I’ve first watched Before Midnight I was a little disappointed. Maybe because I had just turned 20 and I was expecting a poetic, romantic and inspiring film like the first two. But now that I’ve re-watched I had a completely different view and I can see how this third film brings all of them together on a single trilogy. Here, Jesse and Celine are already married with two kids. Jesse has to handle his kid who lives in New York with a problematic mother while Celine has her own troubles of being a wife, mother and independent worker. The problems that haunt them on the back of their heads will explode throughout the film, giving us a little different tone from the previous films but still, extremely special.

It’s funny to realize that internet, iPhones and social media are part of the film as something new since the first two movies had no technology whatsoever. They didn’t even have a phone number in the first film! Here they laugh about what would become of technology, sex through Skype and how one day the computers will write books. But they also talk about the lasting of relationships throughout generations. We have Jesse and Celine, on their 40s; a young couple in their mid-20s, who are spending some time with them on Greece; and another couple of elderly people. All of them compare the relationships they had, what they miss the most and the differences between men and women. 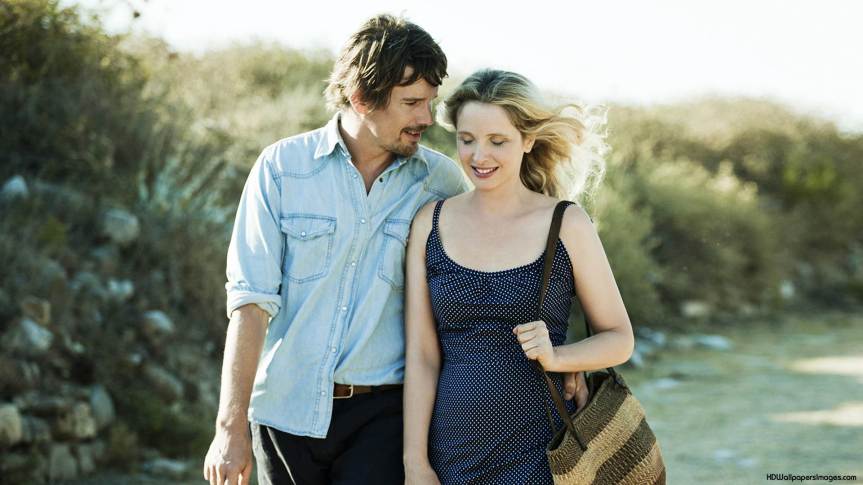 Unlike the previous films, Jesse and Celine are not talking about life and its possibilities since they are too worked up with their marriage, their daughters and the decisions they have to make on a daily basis. This is also exactly what makes them have the worst fight of the trilogy, which almost ends with them breaking up. But unlike Before Sunrise and Before Sunset, these two characters have nothing else to dream about. They have to face reality and accept each other’s flaws and the film does exactly that without providing any answers. It’s the most mature and realistic film of the trilogy and I will love to watch it as I grow older. After all, is impossible to not recognize ourselves in certain moments of these films, especially what they talk about life.

I also love that the second and third installments of the trilogy were written with Ethan Hawke and Julie Delpy, putting a great part of their personalities into the film. After all, the film is all about them with very long takes, so the fact they helped to shape these films and these characters makes the trilogy even more special and more personal. Now that I’m turning 26 is funny to see how things have changed from when I was 16, which was probably when I’ve watched Before Sunset for the first time. Many of the things Jesse and Celine talk about or even go through, it’s extremely touching because I think it speaks to all of us in many periods of our lives. And it’s fun to discover and rediscover these moments, as it’s fun to rediscover these films.

One thought on “Revisiting the Before Trilogy”